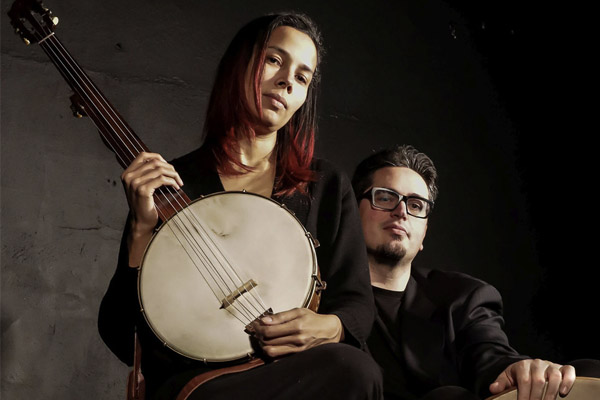 The acclaimed singer, songwriter, actor, composer, and multi-instrumentalist Rhiannon Giddens uses her art to excavate the past and reveal bold truths about our present. A MacArthur “Genius Grant” recipient, Giddens co-founded the Grammy Award-winning Carolina Chocolate Drops, and she has been nominated for six additional Grammys for her work as a soloist and collaborator.

The acclaimed singer, songwriter, actor, composer, and multi-instrumentalist Rhiannon Giddens uses her art to excavate the past and reveal bold truths about our present. A MacArthur “Genius Grant” recipient, Giddens co-founded the Grammy Award-winning Carolina Chocolate Drops, and she has been nominated for six additional Grammys for her work as a soloist and collaborator. She was most recently nominated for her collaboration with multi-instrumentalist Francesco Turrisi on There is No Other (2019). Giddens’s forthcoming album, They’re Calling Me Home, is a twelve-track album, recorded with Turrisi in Ireland during the recent lockdown; it speaks of the longing for the comfort of home as well as the metaphorical “call home” of death, which has been a tragic reality for so many during the COVID-19 crisis.

Giddens grew up in the North Carolina Piedmont, listening to her uncle’s bluegrass band. After receiving a degree in Opera Theater from Oberlin Conservatory, Rhiannon learned about the long, almost forgotten line of traditional black string bands, and found her place in American music history. This led to the formation of the Carolina Chocolate Drops, which became the first black string band to perform on the Grand Ole Opry. The band’s fourth album Genuine Negro Jig (2011), won a GRAMMY.

After the Chocolate Drops broke up in 2014, Giddens launched a solo career and today, with too many prestigious awards and nominations to list individually, her musical fingerprints are found on a wide range of projects driven by her determination to excavate the histories of forgotten and excluded people. In 2017, she was awarded a MacArthur Genius Fellowship, and became one of only four musicians to play at both the Newport Jazz and Folk Festivals. Giddens has performed for the Obamas at the White House, served as a Carnegie Hall Perspectives curator, and received an inaugural Legacy of Americana Award from Nashville’s National Museum of African American History in partnership with the Americana Music Association. Her critical acclaim includes in-depth profiles by CBS Sunday Morning, the New York Times, the New Yorker, and NPR’s Fresh Air, among many others.

Giddens is featured in Ken Burns’s Country Music series, which aired on PBS in 2019, where she speaks about the African American origins of country music. She is also a member of the band Our Native Daughters with three other black female banjo players,

In 2019, Giddens released two studio albums: “Songs of Our Native Daughters” with Allison Russell, Leyla McCalla and Amythyst Kiah, and there Is no Other with Italian musician Francesco Turrisi. Her 2020 “I’m On My Way” has been nominated for a GRAMMY in the Best American Roots Performance category. RiannonGiddens.com

Grammy nominated multi-instrumentalist Francesco Turrisi has been defined a “musical alchemist” and a “musical polyglot”. Since leaving his native Italy in1997 to study and play jazz piano and early music, he has released 7 critically acclaimed albums. Since 2018, he has been collaborating with Rhiannon Giddens on a duo project that seamlessly combines music from the Mediterranean with music from the African diaspora in the Americas. In 2019 Giddens and Turrisi released their critically acclaimed duo album there is no Other. The album single “I’m on my way” was nominated for a 2020 Grammy Award.