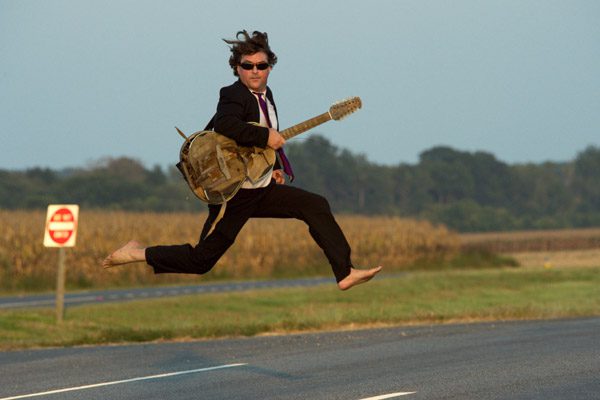 Singer, songwriter, guitarist and multi-instrumentalist Keller Williams is literally a one-man jam band. Combining elements of bluegrass, folk, alternative rock, reggae, electronica/dance, jazz, funk, along with other assorted genres, he frequently uses live phrase looping with multiple instruments. This allows him to play unaccompanied on stage, helping him to recreate the sound of a full band. The end result often leans toward a hybrid of alternative folk and groovy electronica— a genre Keller jokingly calls “acoustic dance music” or ADM.”

Growing up in Virginia, Williams was given his first guitar at age 3, but didn’t actually start playing until he was in his teens. He first appeared on the scene in the early ‘90’s and his solo live shows, filled with quirky improvised tunes, quickly became the stuff of legends. While his live gigs have largely been solo affairs, Williams has nearly always used his albums as a forum for collaborations with fellow musicians, such as The String Cheese Incident, The Grateful Dead’s Bob Weir, banjo master Béla Fleck, American musician/poet Michael Franti, The Travelin’ McCourys, and many others. As years have gone by and Keller has continued to evolve he has created more and more unique projects and collaborations with fellow musicians.

After touring in 2010 with original Grateful Dead drummers Mickey Hart and Bill Kreutzmann as part of their powerhouse assemblage, The Rhythm Devils, Williams put together two Dead-inspired projects: Grateful Grass and Grateful Gospel. He’s toured as a string trio with Larry and Jenny Keels as Keller & the Keels.

His many other side projects include his six-piece funk band called More Than A Little, a reggae funk band dubbed Kdubalicious, acoustic acid jazz band Williams’ Kwahtro, and Pettygrass Featuring the Hillbenders, playing bluegrass versions of Tom Petty songs. The man is nothing if not eclectic! His latest albums are the 2019 releases SPEED (Keller & the Keels) and ADD and the 2020 digital album, Cell, a collaboration between Keller Williams and Erothyme.