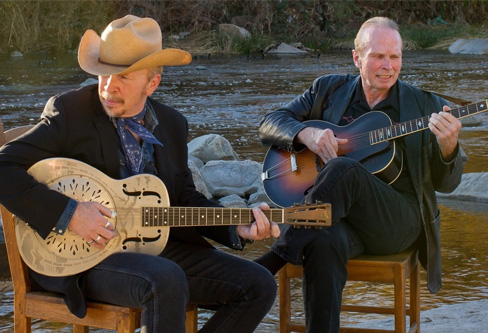 Influenced both by their upbringing in the sprawling heat of Southern California and Delta Blues legends like Son House and Leadbelly, Dave & Phil Alvin began to gather a following in the 1970s with their rock and roll band The Blasters. After the band disbanded in the 1980s, each brother devoted time to their solo careers and other projects, making a profound impact on the development and songwriting of modern folk and Americana. In 2014, the rekindled partnership gained recognition with the release and Grammy-Nomination of their duo album “Common Ground”.

Set apart by Phil’s honest poeticism and vocal styling coupled with Dave’s reflective and virtuostic blues-influenced guitar style, they have toured around the country both as a duo and with their band The Guilty Men, garnering nominations and awards along every bend in the river. Most recently. They were nominated by the Blues Music Awards in Memphis, Tennessee for the 2016 Traditional Blues Male Artist award. They have also been featured on NPR’s Fresh Air, and included on the Los Angeles’ Times Albums of the Year listery in 2015. This is their first Rhythm & Roots Festival.