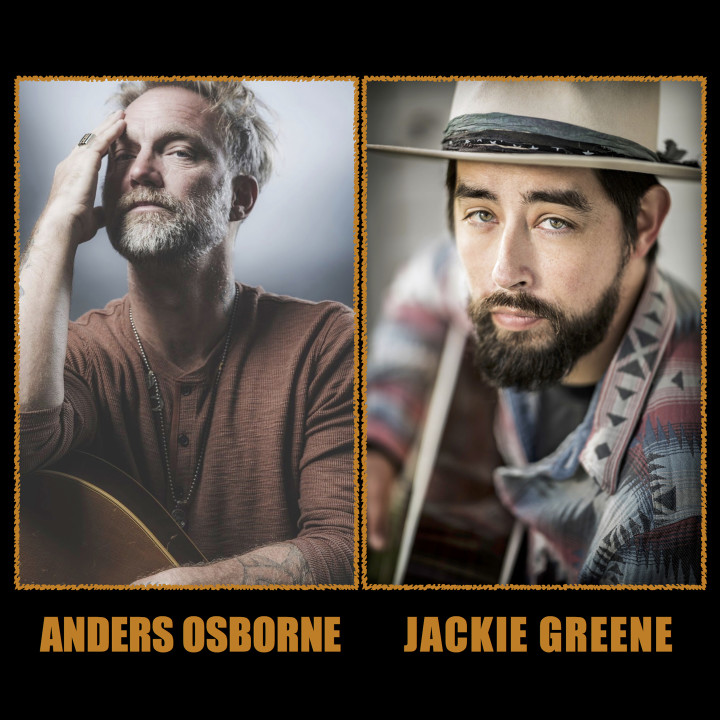 Talk about a dynamic duo! Powerhouse guitarist and songwriter Anders Osborne is currently touring together with Americana and Roots singer-songwriter Jackie Greene, and they’ve ditched their bands for some stripped down acoustic performances, each taking a turn with one of their songs, while the other provides accompaniment.

Talk about a dynamic duo! Powerhouse guitarist and songwriter Anders Osborne is currently touring together with Americana and Roots singer-songwriter Jackie Greene, and they’ve ditched their bands for some stripped down acoustic performances, each taking a turn with one of their songs, while the other provides accompaniment.

Between the potency of his richly detailed songwriting, his intensely emotional, soulful vocals and his piercing, expert guitar work, New Orleans’ Anders Osborne is a true musical treasure. He is among the most original and visionary musicians writing and performing today. Guitar Player calls him “the poet laureate of Louisiana’s fertile roots music scene.” New Orleans’ Gambit Weekly has honored Osborne as the Entertainer Of The Year. OffBeat named him the Crescent City’s Best Guitarist for the third year in a row, and the Best Songwriter for the second straight year. Osborne also won Song Of The Year for his composition, Louisiana Gold. A powerful live performer, the musician has won over fans through non-stop touring as well as a heralded collaboration with the North Mississippi Allstars & Southern Soul Assembly. Since his recording debut in 1989, Osborne has written virtually all of his own material and contributed memorable songs to a wide variety of artists. His songs have appeared in multiple feature films, and he was also seen performing in an episode of HBO’s New Orleans-based drama, Treme.

Americana and roots singer-songwriter Jackie Greene is a jack-of-all-trades, and an artist who can croon over soulful piano ballads as much as he can shred a bluesy guitar solo (like he did as the lead guitarist for The Black Crowes in 2013). A road warrior and musician’s musician, Greene is a student of American music, transfixed upon its progression through time, as well as how regional sounds fit in a contemporary context. He has built an enduring audience through a relentless touring schedule with the likes of BB King, Mark Knopfler, Susan Tedeschi, Taj Mahal, and now Anders Osborne. He played lead guitar with The Black Crowes on their Layin’ Down With #13 World Tour, recorded and toured with Trigger Hippy, and in the last four years performed over 300 shows of his own, all while continuing to record and release his solo work. Greene is a frequent member of Phil Lesh & Friends, and sits in with countless other artists including Tedeschi Trucks Band, Govt Mule, Mississippi All-Stars, Amy Helm, Steve Earle, and Bob Weir.